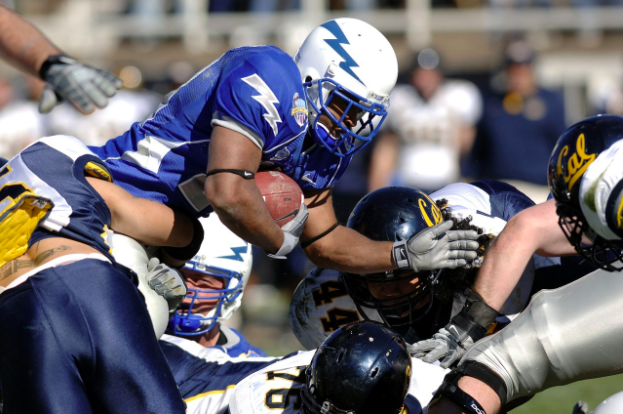 The Daily Fantasy Sports (DFS) football is a game you can play online to create your roster and compete with other players. The team you must form is like the real NFL games composed of complete positioning in the field. By picking the best players, you can ensure a winning DFS football game.

One of the most important positions to find when playing the DFS is to look for a top running back player. The running back (RB) is part of the offensive backfield where he receives the ball from a rushing quarterback, passes to the wide receiver, and blocks the rushing opponents. In a typical football tournament like the NFL, you can see two RBs in the field, and it works the same with DFS.

The 2020-21 NFL season is set to begin in September. While waiting for this event to happen, DFS football is now taking place in many sites for you to play. Hence, as you decide to earn and entertain yourself in the DFS football games, here are the ten best running-backs you can heed.

Projected Daily Fantasy Totals of NFL Players includes picking the top running backs, to begin with. Taking the top spot for the DFS running back ranking today is Christian McCaffrey. In his last game, he wrestled against the Las Vegas Raiders and earned 18.4 average points. McCaffrey has been an RB player for the Carolina Panthers since 2017.

Awarded as a three-time Pro Bowl, Ezekiel Elliot is on the second place for the DFS ranking. He garnered a total of 16.1 projected points after jousting against the Los Angeles Rams. Elliot is an RB player representing the Dallas Cowboys. This year, he will play with the same team since he came in 2016.

Although he got lost in his last matchup with Pittsburgh Steelers, Saquon Barkley still garnered 15.8 average points allowing him to clinch the third place in the current DFS ranking. He is a running back playing for the New York Giants. This year, he’s heading to the NFL games for the second straight year, which was once awarded as an NFL Rookie of the Year.

In his fourth year playing with the Minnesota Vikings as a running back, Dalvin Cook settled in fourth place for DFS ranking. He presently holds a total of 15.7 projected points to secure the said rank. Looking into his career achievements, Dalvin Cook was a Pro Bowl awardee in 2019.

Recording a total of 14.4 projected points against the Carolina Panthers, Josh Jacobs secured the 5th position in the current DFS ranking. This running back has played with Las Vegas Raiders since last year. During his debut year in professional football, Jacobs was awarded the PFWA All-Rookie Team in  2019.

Alvin Kamara was a running back player for the New Orleans Saints since 2017.  He was awarded as a three-time Pro Bowl player since he started his career. In the current running back DFS running ranking, Alvin Kamara has earned 14.3 projected points. With that, he successfully took the 6th spot.

Taking a seat in the 7th place for the DFS ranking is Derrick Henry. He was able to garner a total of 13.9 projected points after jousting against the Denver Broncos. Henry will be playing for the Tennessee Titans in a fourth straight year. In his professional football career, Derrick Henry was awarded as the NFL Rushing Yards Leader and Co-Leader in 2019.

During his last game against the Los Angeles Chargers, Joe Mixon garnered 13.7 projected points, which allowed him to rank in the 8th place for the DFS today. He is a running back player for the Cincinnati Bengals and joined the team in 2017.

On the 9th place for the DFS ranking today for all running backs is Nick Chubb. He earned a total of 13.6 points after he competed against the Baltimore Ravens. Chubb is a running back player who will represent the Cleveland Browns in the upcoming NFL season.

Completing the list for the ten best running backs in the DFS ranking today is Austin Ekeler. He was able to earn a total of 12.8 projected points after winning his last game against the Cincinnati Bengals. Ekeler is a running back who has played with the Los Angeles Chargers since 2017.

The running backs in the NFL takes another huge responsibility to end up winning divisional matchups and emerge in the playoffs season. The same with the DFS football games, these players are also critical when creating a winning roster. Thus, in your next DFS games, along with getting competitive tight ends and quarterbacks, consider the ten best running backs above to defeat every opponent you face.